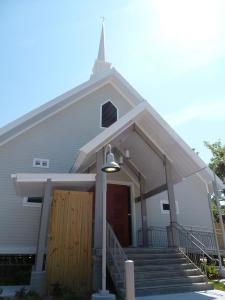 I thought the old St. Genevieve Church in Slidell, Louisiana was a thing of beauty, and it held special memories for me because
Mikey, my favorite cousin, was married there.
But it was destroyed by Hurricane Katrina in 2005.

The new church has its own uniquely Louisiana charm.
The architecture resembles a typical raised cottage of South Louisiana.
You can guess why the smart money is on a house (or church) built on pylons.

I would say that the new St. Genevieve’s doesn’t look like a church at all, until you creep up to the windows,
where stained glass vitrines are suspended within the protection of double-panes of glass…

…or until you notice the steeple perched atop the front gable.
I still think this church is a thing of beauty, even if it isn’t a thousand years old.

Fortunately, the chapel that was built in 1961 still stands.

A plaque next to the front door explains that Alfred Mayer had the chapel erected in memory of his departed wife.
I’d never heard of such a thing, but I figured that if it made the burden of losing his wife a little lighter, why not?

Some other pre-storm entities still stand on the church grounds, such as this rude rood…

…and a few nearby venerable old oak trees who stood their ground. 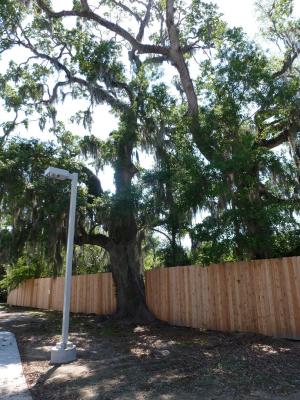 Some things remain the same even when they change.

Thank you for indulging me in yet another church siting.