We Socks decided – well, ok, it was Stacy Lyn who decided, but we tagged along – to go south of the equator for the first time.

The trip from Lomé, Togo to Johanessburg, South Africa was not fun. We had to fly, and the ride was quite turbulent.

We are socks, and socks belong on feet, which belong on the earth – so we have always perceived air travel to be unnatural for the sock-inclined species. Sigh.

The city welcomed us, however, and it was beautiful, dotted with green and purple foliage. 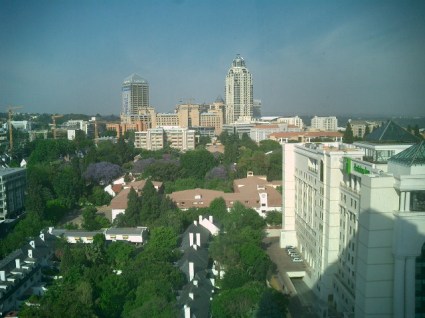 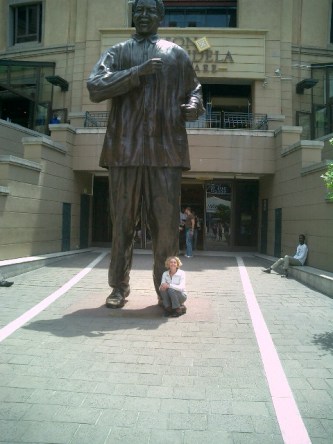 Then we went to Lion Park, which is actually inside the city limits, where brave (or foolhardy) visitors can pet the cubs – though they were generally uncooperative when we visited.

All looks well in this picture, but see that fellow to Stacy Lyn’s left? He had designs on us!

He came down and joined us…and it is frightful when you don’t know what he (cute and cuddly though he may appear) is up to behind your Socks.

These creatures seem much less frightening from a distance.

That night we left the cub compound and went to visit the other animals who lived on the preserve. We saw mama and papa lions feeding and heard the papa’s ferocious growl in the complete blackness of an African night.

It was a splendid trip to another part of the Dark Continent.