Mama was in France on Mother’s Day, so Norm and I decided to leave Paris and take her on a tour of a little-known town in Normandy called Incarville.

Along the way, a very welcome blue sky blanketed us – a nice change from the incessant rain that had drenched us since Mama’s arrival.

In the distance, we could see fields and fields of curious yellow flowers – which we later discovered were colza (rapeseed) used to make canola oil.

Their scent was heavenly – almost buttery – so we had to stop to take a closer look, and to get a bigger whiff.

To stand amidst the pastels of Normandy with my mother was a treat for me. Too many years had passed since I had seen her on Mother’s Day. She has her life on one continent, and I have mine on another. But this year, our feet touched the same continent on la fête des mères. 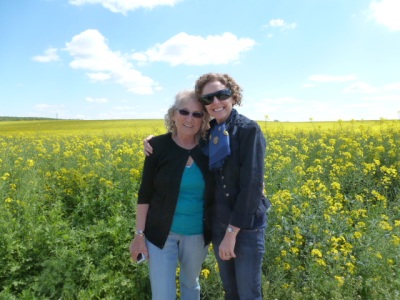 Only an hour west of Paris, we made it to Incarville later that morning. We drove sraight to the main draw of the town – a memorial stone dedicated to FLt. Thomas Smith. (My Socks tell you all about it in this post.)

After visiting FLt Smith’s monument, we searched for a place to rest and have a cup of coffee before heading back to the big city. Of course, this outing took place on a Sunday, and if you’ve ever spent any time in France, you know that most establishments are closed on the seventh day. Still, we were hopeful and decided to “try” the door at a local café; alas, it was locked.

As we turned away, the owner appeared on the stoop and invited us in. He pulled a table and some chairs into the backyard and offered us the beverage of our choice. As his little boy played in the yard, he made us some espresso, and then we enjoyed a quiet moment in the warm sunshine of western France. Chatting over coffee is one of our favorite things to do, and I miss the days when we could do that whenever we wanted. 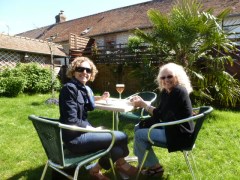 I only have one mom – and I landed a good one. She took care of me for many years, and now I am happy to pamper her once in a while. It’s the least I can do – she deserves it! ❤