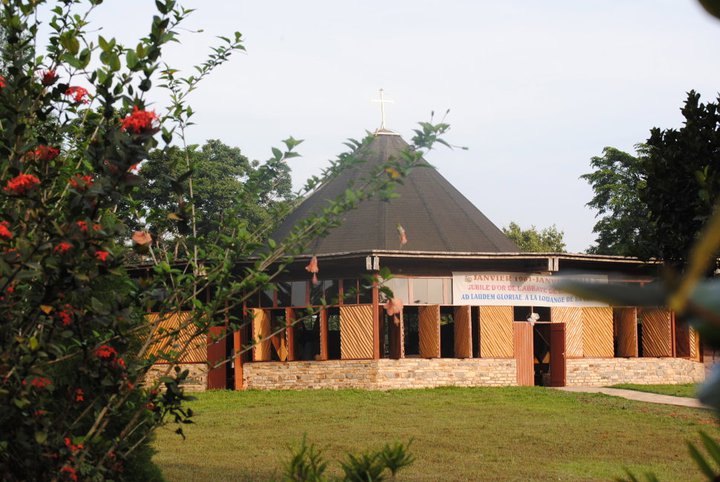 If such a thing is at all possible and not completely paradoxical, I was a cloistered nun in another life. There is something about solitude, contemplation, and introspection that recharges my batteries. Modern psychologists might call this preference “introvertism,” but psychoanalysis didn’t exist during the Middle Ages, so that can’t possibly be what this is.

At any rate, one of my life’s dreams has always been to spend some time in a monastery. You know – pretend that my life consists wholly of this quiet that my mind always finds difficult to attain in this modern world. But, if I can’t spend a lifetime in a cloister, one night would be acceptable. I could live with that.

So, where am I going with this? Well, I had the opportunity back in 2011 to take a little hike up a few mountains in the Dayes plateau of Togo. Destination: Abbey of the Ascension.

The drive from Lomé to the abbey would take, oh, I suppose about three to four hours. However, we stopped for lunch along the way, and traveling and dining take longer in Togo than Americans would expect. I have no complaints about the often bumpy, always dusty trails that my friends and I had to endure en route. My journey had already begun, after all. You can’t pule about a little discomfort when enlightenment is the goal. 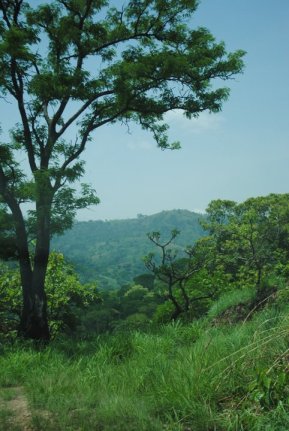 It was dusk by the time we arrived. A perfect hush accompanied the low light, creating a flawless welcome for us. 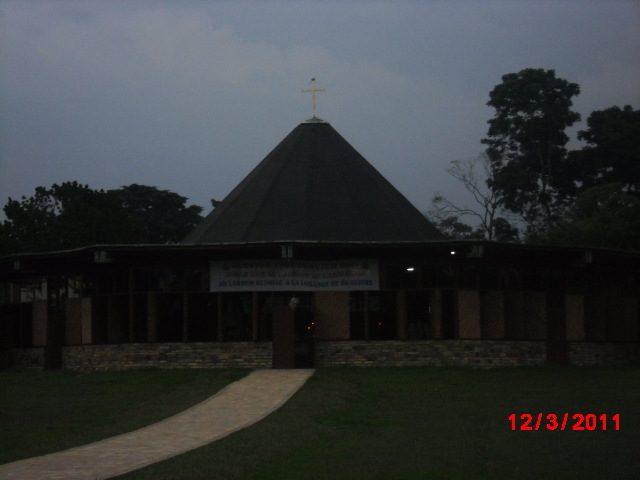 We ate a rather unappetizing white supper: boiled noodles with butter, rice, and some other bland affair which I cannot remember presently. Still – no complaints from me! I was loving every minute of it. I didn’t consider this a sacrifice – I was living a dream.

After supper, as this was a monastery, there was no form of entertainment save whatever you could come up with your own self.

I knew what I wanted – a shower and a chance to sit in my room and contemplate. (Notice there is not direct object to “contemplate.” As in, contemplate what? No, that would defeat the purpose of this particular moment of contemplation. I wanted my mind to be my guide.)

I couldn’t completely ignore external stimuli, though you can tell from my bedroom that there was not much of that going on here. I couldn’t help but to read the sheet of paper that the monks had placed on my desk – the rules of etiquette, the history of the abbey, stuff like that . (If there is something to read, I will read it. It’s a sickness.) I also poked around the room, noticing that there was a back porch off my room that looked out into the woods. I tried contemplating out there, but there were too many mosquitoes.

The next morning – it was a Sunday morning – was straight from my nun dream life. I was awakened by the voices of the monks – they were singing their positively heavenly matins! Oh, had I died and gone to heaven?

I quickly donned my clothes and headed to the church. It was like a church I had never before seen (except in the twilight the previous evening, of course). 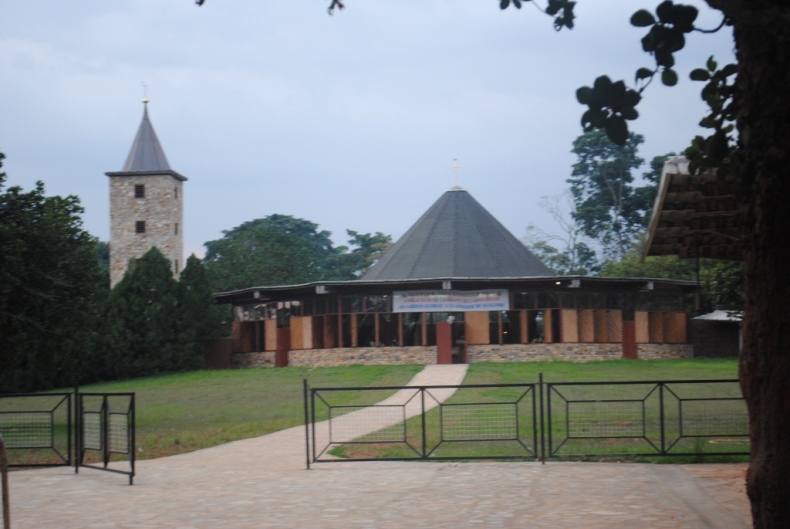 Open doors and windows on every wall of the circular edifice captured a gentle zephyr. Just look at the woodwork – so different from the stone interiors of the world’s best known cathedrals in Europe, but equally as impressive.

The unfamiliar – such as the stonework, the etchings, the handhewn tables -took their place among the familiar – the chalices, the tapers, and the holy water. 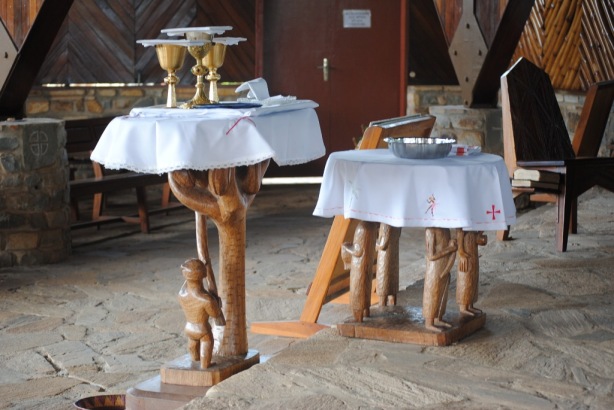 After the morning Mass was finished, we took a tour of the monastery’s grounds, where the Benedictine monks run a farm and an orchard. They also cook some of their produce into jams and syrups and then can them right there on the premises. 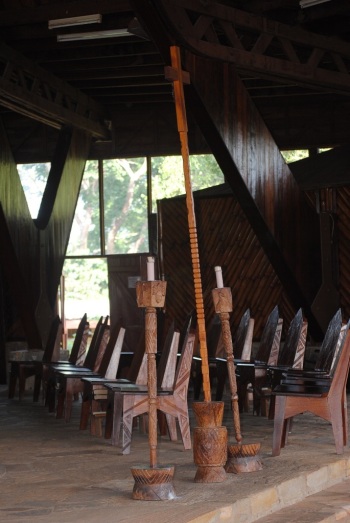 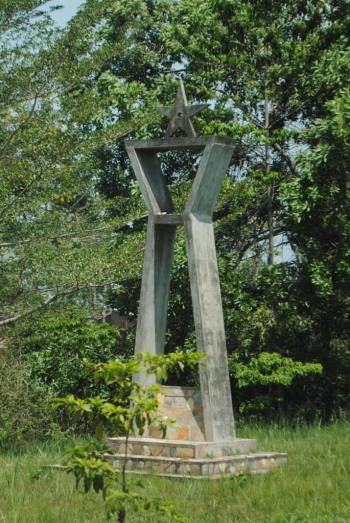 Flowers and creatures flourish among the orchards and vegetable gardens.

This uniquely Togolese abbey was built by the contemplative order of St. Benedict in 1961. Accent on the “contemplative” part – I knew I would love it here!

In addition to the abundant evidence of life at the monastery, there was a not-so-subtle reminder that all roads converge and lead us to the same place. I suppose this is one of the reasons why we need contemplation – to quiet festering cognition of mortality.

And when the day was done, my dream weekend was finished. Although it was time to say goodbye to the Abbey of the Ascension, I was not filled with a sense of loss, as I usually am when leaving a place. I had spent one glorious night in a monastery, and I was delighted that it had provided everything that I had always hoped it would – peace, rest, quietude, and renewed faith. 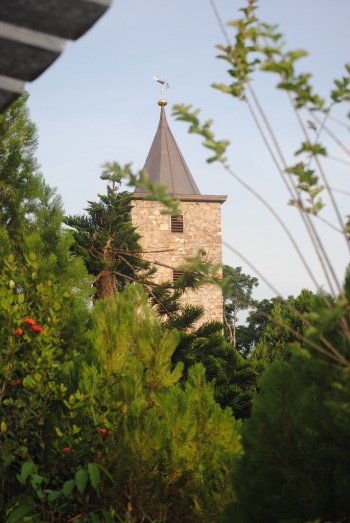