Norm asked me, “What do you want for your birthday? Do you want a Kindle? Do you want me to surprise you?” (He always asks three or four questions before I get a chance to answer the first one.)

It’s difficult to ask for people for your birthday. “A fire pit,” I answered to his first question.

“Really? That’s all? Where do you want me to build it? Close to the water or close to the house?”

“Yes, that’s all.” But it’s so much more than a fire pit. I didn’t answer his third question right away. 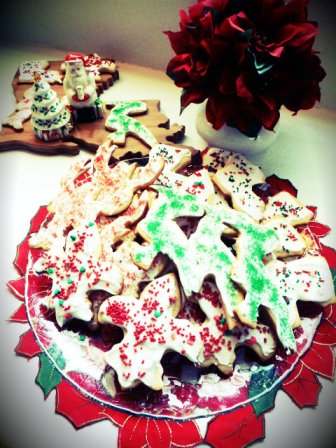 It all started when Norm took one of our fifty-five gallon drums to a welder and had him cut it in half. Norm then took the open half of the drum, set it into the grass a few inches and layered river rocks at the bottom of it. His final touch was to surround the exposed portion of the drum with curved rocks he had purchased at a local hardware store.

I call Heidi the Stitch Wizard. There is nothing she can’t knit!

You see, Gentle Readers, this was not just any old ordinary birthday. This was my fiftieth, and that half century comes with a certain freedom – the freedom to know what I really, truly want at this point in my life.

Norm gifted me with a place to gather with the people I love. That’s the other freedom that comes with a half century of life – the ability to enjoy what matters in life and not to bother with things that don’t.

JIllian’s beau stokes the fire in the woodstove.

My fire pit accomplished what I hoped it would: it brought people together. This time the occasion was my birthday. Next time I hope it will be for no reason at all.

What would my birthday be without Cupcake?

Heidi and I knitted. Jillian baked and decorated my Holly Hobbie cake with Heidi’s children. Justin and Norm tended to the fires both inside the house and out.

We dined; we sang; we roasted dogs and mallows, shot fireworks till kingdom come.

It was my best birthday yet.

Norm stokes the fire during the revelry.

It isn’t too much to ask for fifty more just like it, is it?

Fireworks round out the evening.

One more thing, Gentle Readers: Don’t take the tree down yet; it’s only the eighth day of Christmas!

May all of you have a very healthy, happy, prosperous 2014. ~Stacy

10 thoughts on “A Welcome Kind of Birthday”