When I was a little girl, I thought my best friend was beautiful: tall, with dark brown locks and exotic hazel eyes. Her looks contrasted with (what I believed to be) my very ordinary blond hair, blue eyes, and petite stature.

Her grandmother was a very gentle, soft-spoken old woman who wore funny hats, and she adored her granddaughter. (I wanted to be adored like that by someone.) She allowed us to poke around her house and her possessions as only indulgent old grandmothers are wont to do.

One day I espied an elegant glass figurine of a beautiful woman resting atop her grandmother’s dresser.  I gazed at it longingly and was told that it was a Royal Doulton.  I didn’t know what that meant, so my friend explained that Royal Doulton was a very expensive English china and that this one would be hers one day. I vowed to myself that one day I would have one of my own to admire whenever the fancy struck me.

As a young bride-to-be, I registered for china – “Diana,” by Royal Doulton. 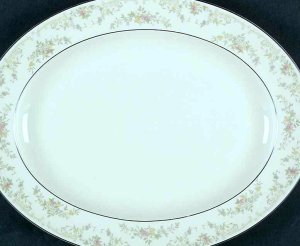 Royal Doulton Diana – ’twas not to be!

I loved its simple, elegant design, and I had finally achieved my dream of Royal Doulton. Unfortunately, fate intervened and I was forced to sell it after I had been married for a few years when money was tight and debt was not an option.  So, once again, I was a Royal Doultonless woman.

Fast forward to the year 2000, when I went on a European vacation. Oh, happy day – England! I dreamed about the Tower of London, Buckingham Palace, Westminster Abbey, Abbey Road, and – Royal Doulton!

Alas, it was not to be. I came home with a Waterford ballerina (yeah, yeah, Irish crystal).

Move ahead to 2004, and I’m back in London, this time with my parents. My mother had been hearing of my Royal Doulton woes for decades.  We took the Tube down to Harrod’s, looked at the directory, and made a bee line for the china section (a veritable museum).

I chose the simplest statuette:  An elegant woman wearing a pale yellow dress with a floral tippet draped over her shoulders, the end of which she held in her right hand as she shaded her eyes with her left hand. 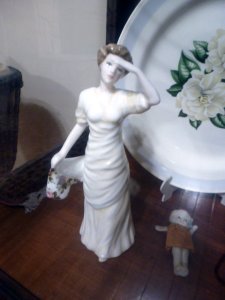 Royal Albert – out of the attic during summertime.

A few months later, I received a package from my dad and opened it with aplomb to discover an ecru china cup with no handle. It had no decoration save lily petals in bas-relief – simple and elegant.  I turned it over to read the bottom: Royal Doulton.  I knew why Dale had bought it for me, this forlorn Royal-Doultonless woman.  I called him up to thank him.  The tone in his voice said more than the words, “Did you see?  It’s a Royal Doulton.”  Yes, I had seen the name, but more than that, I saw that he loved (adored!) me very much. He has never, ever been my stepfather. He’s been my step-up father. 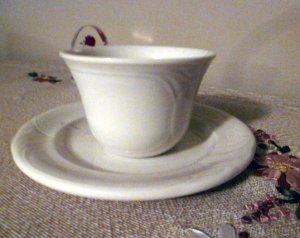 The following year, when I visited my parents in Colorado, they accompanied me to the local thrift store where Dale had found the Royal Doulton cup.  As we perused the trove and found sweaters, kitchenware, and books, Dale hit the jackpot yet again – a saucer with no decoration save a lily in bas-relief.  It matched the cup! The pair has been sitting proudly in the center of my dresser ever since.

When I visited London in 2008, I went back to Harrod’s again to get the blasted Royal Doulton figurine. I found one I liked, purchased it without too much agonizing fanfare, and packed it in my suitcase. 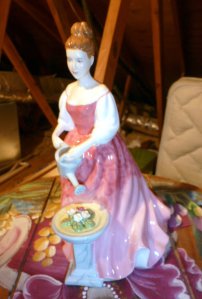 Royal Doulton Alexandra stays in the attic until spring.

Happy Father’s Day to the best dad a girl could ever have. You’re better than a Royal Doulton! ❤