This was an important summer for Stacy Lyn, friends. She calls it the “Summer of Healing.” She’s been stressed out for the better part of ten years, beginning in 2005 with the storm, and snowballing to summer 2014.

Her body told her that it had had enough. So (finally), she listened. She turned off everything related to the twenty-first century and did some serious evaluation of what to keep and what to discard in her life.

Nature affirmed her decision with this little token on her driveway on a day when she was feeling particularly low. When she saw this, she knew that she – that everyone she loves who is hurting – would be all right.

As part of her letting go, Stacy Lyn dusted us (her Traveling Socks) off, and took us on a road trip with her beloved Norm.

Let me recount our magnificent trip that took us across several states throughout the Great Plains.

We headed north from Louisiana, crisscrossed Arkansas (where we stopped to say hello to dear friends) and Missouri. Stacy Lyn had been to these places before, so she didn’t count these stops as part of the trip, even though, technically, they were.

Then we made it to Iowa! Iowa – wow! We had never been there before, and had to ask exactly where we were when we stopped at Starbucks for an afternoon cup of Joe. Can you guess from the photo what Stacy Lyn’s beverage of choice is?

No, we did not spend a significant amount of time in Iowa as it was not the destination for the day. We wanted to make it to Brookings, South Dakota, where more dear friends live. We will tell you about South Dakota next time – because there is so much to tell.

But for now, let’s continue on to Nebraska, our first stop as we headed south towards home.

We spent the night in quaint little York, where their water tower is festively painted like a hot-air balloon.

Stacy Lyn and Norm stopped at the divine Chances R restaurant, where Stacy Lyn felt she could almost be back in France again.

One would believe Stacy Lyn would order beef, or at the very least, corn. No, she ordered the lobster. She does not fool with red meat. Or corn, for that matter.

The lovely couple got up early the next morning and continued south through Kansas, the place that Dorothy Gale called home (and Laura Ingalls, too, when she lived in Indian territory).

For whatever reason, their corn did not seem as robust as that of Nebraska. Though the expansive sky – the most striking feature of the Kansas landscape – more than made up for the forlorn cornstalks.

Before we left Kansas, we lunched at a quaint Mexican restaurant in Hesston. Stacy Lyn was feeling lazy, so she stuck us in this planter and snapped a shot.

From there, they passed through Oklahoma and noticed an increase in the number of derricks along the highway. I’ll tell you about the family’s trip to the OK state some other day. For now….

….they continued through Texas – the last foreign state before arriving home. Stacy Lyn was not enchanted with Dallas. Not because it is Dallas, but because of city trappings: noise, pollution, traffic. 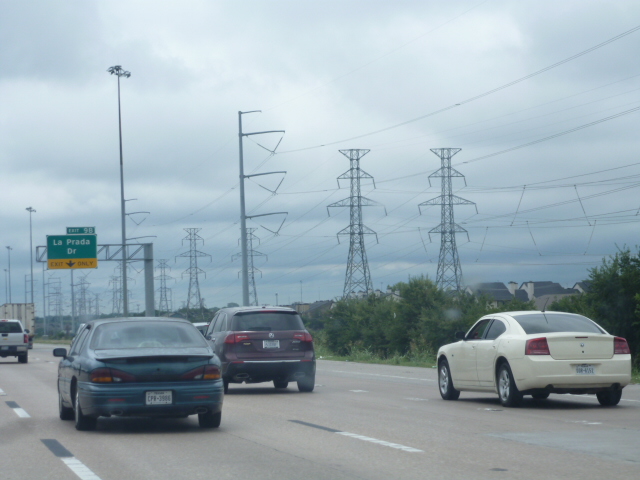 Stacy Lyn was flattered, however, that they named a road after her in Dallas. 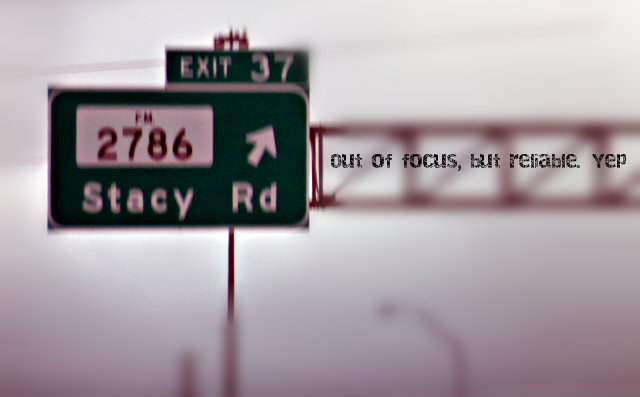 Stacy Lyn loved her time on the road with her Norm. She finally understood why he loves riding a motorcycle. It is, indeed, liberating to have no schedule, to have no expectations, to let the road be your guide.

And it was a wonderful way for Stacy Lyn to continue her path – so that when she arrived home to the twenty-first century and all of its encumbrances, she knew what it is that she needs, really needs. And what she doesn’t.

Breathe in, deeply. Exhale and expel. Because if it’s not killing you right now, there is no reason to hang on to the stress.

That’s what she has learned, anyway.

Next up – South Dakota and a peek at its wonders!