We, Stacy Lyn’s Traveling Socks, were not delighted to part ways with Cicely, Alaska – a/k/a Roslyn, Washington. However, there was one sure way to get us on the road headed south to Oregon: the promise of visiting an erstwhile unexplored city, listening to good music, and dipping tootsies in the ocean.

After leaving the beloved little town in Washington, Stacy Lyn and Norm wound their way through the Cascades until they arrived in Portland, Oregon. This was their first time ever visiting this westernmost state. It enchanted Stacy Lyn immediately when she walked into the hotel lobby in the middle of July and a nice fire was roaring in the fireplace. Fancy that! Here it is January in Louisiana and she had to turn on the air conditioner because it will encroach upon 80 degrees today – yuck! Those Oreganders (Is that the proper term? If not, it should be.) don’t know how lucky they are to be chilly in July.

When in Portland….you know the rest. So we took a bus ride around the city to sightsee while on our way to the Pearl District, where the food trucks are located. Around an entire city block, food from almost anywhere in the world can be found. The trucks line the street, and pedestrians can stroll up to the window to order their choice in world cuisine. Norm and Stacy Lyn opted for Thai, and within a few minutes, voilà! A box of pad Thai in hand, they moseyed on down to a concrete park, sat on a bench, and people-watched as they dined in the dusk of Portland. 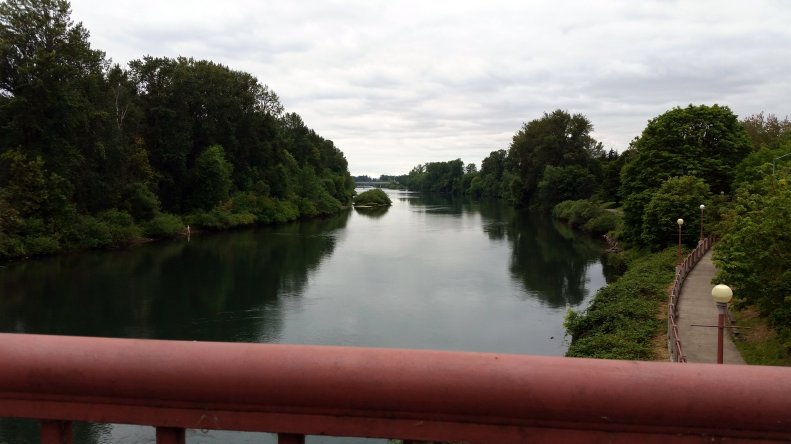 It was a quick turnaround, and the following day Stacy Lyn and Norm packed up the car and drove further south to Eugene. As far as Stacy Lyn was concerned, this was the pinnacle of the trip. “Why Eugene,” you ask? Ah, très simple, mon ami! Chris Cornell was scheduled to stop at the Holt Center in downtown Eugene as part of his Higher Truth tour. As Stacy Lyn and Norm dined across the street from the venue, Norm noticed a young black gentleman in an anachronistic suit waiting outside what appeared to be Chris Cornell’s tour bus.

“I bet he’s waiting to see if Chris Cornell materializes,” Stacy Lyn conjectured. “I have to tell you, if he comes out of that bus, I’m running over there!”

“Do what you have to do,” Norm responded.

But Chris never materialized. No matter – the music was what Stacy Lyn wanted, and what better way to spend an evening than to listen to songs that elevate the soul to parts that can never be reached with music or words alone?

Inside the Holt Center at the t-shirt table, Stacy Lyn read the name of the opening act, Fantastic Negrito. She had never heard of him, but looked forward to being exposed to something new. And when the curtain opened, who should appear but a young black gentleman in anachronistic clothing – the same man hanging around the tour bus, only it was probably his tour bus. His music sounded like bluesy rock with a little bit of storytelling. In fact, he was quite a comedian, and the stories he told of his life were as entertaining as his music.

But it was Chris who Stacy Lyn had traveled 2000 miles to hear, and he did not disappoint. He played not only songs from his latest album, but also a few from previous albums, Soundgarden and Audioslave (yay!), and a few covers from Led Zeppelin, U2, and Metallica – with a Chris Cornell twist, of course. One can never really hear a great song without becoming part of it. Stacy Lyn feels she is still out there somewhere, in those songs, in the cosmos. The show was over all too soon, but the memory is still there, tucked away in Stacy Lyn’s grey matter, there to be withdrawn when the need arises.

Stacy Lyn knew that that evening was the pinnacle of the vacation. However, the next leg of the trip took them to coastal Oregon, not only for the ceremonial walk on the shore, but to visit with friends new and old. New to Stacy Lyn, and old to Norm because Chip served on the U.S.S. Sargo with Norm back in the submarine’s heyday.

As it was in Portland, the air was crisp and cool, only laced with a bit of salt and a touch of humidity. The food was divine – seafood was on the menu, crab to be specific. (Sorry, but this far surpassed the Portland food trucks!) And the quaint little town of Seaside boasted candy stores, gift shops, and a statue of Lewis and Clark at the end of the boardwalk. Stacy Lyn said what she always says when on vacation, “I could live here.” But could she really? Home is not the coast of Oregon, even if it seems it could be.

Driving up the coast, north to Washington, then south to Portland to catch a flight back to Louisiana, Stacy Lyn kept thinking, “I could live here,” knowing full well that she probably could not. Home still eludes her, even though she still dreams of such a place. She was headed back to Louisiana, the state where she was born, the state where she was raised, not entirely sure that even this place qualifies as home.

Maybe it’s time to ramble on, but until that time comes, we Traveling Socks with accompany her to her temporary travel home.

4 thoughts on “Socks Mosey over to Oregon”