When Norm and I visited Detroit last fall, we took the Detroit People Mover train around the downtown area to get a better taste of the city. As the train weaved its way through the city, we enjoyed incredible views of the Detroit River and some of the old architecture.

But I also noticed something extremely enchanting as we waited for a train at one stop or another – the beautiful artwork in the various stations. Tile graced the walls and floors of several stations, while some boasted statues in various media, like the statue of a commuter reading the newspaper (remember those?) while patiently waiting for the train. 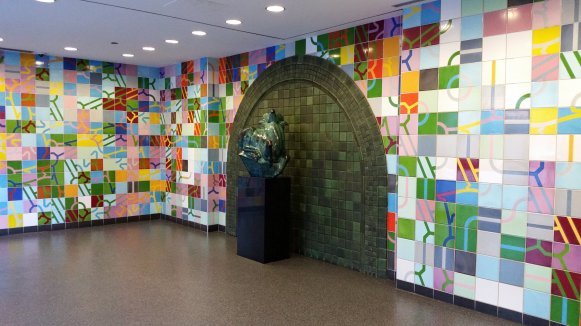 Renaissance Center – where we started

In order to perpetuate the memory of this artwork, I took another tour around the city, this time disembarking at each stop to get a snapshot of each station’s masterpiece. The artists’ names may never be known, but does that really matter? Isn’t art there for the enjoyment of the viewer? It’s of no consequence if the artist’s name was Joe Down-the-Street or Rembrandt. I don’t think so, at least. After all, most of the sculptors of the Romanesque and Gothic cathedrals of Europe have had their names banished to oblivion, but we still admire their work nonetheless.

So here, friends, is the artwork along the Detroit People Mover. Thank you, artists, for your contribution to beauty. 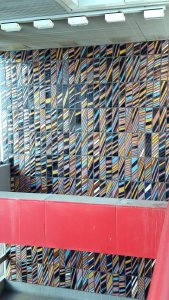 2 thoughts on “Artwork in the Detroit People Mover Stations”