‘Twas the day after Thanksgiving. (You thought we were going to say something else, didn’t you?)

Anyway, the day after Thanksgiving, Stacy Lyn took us (her Traveling Socks) on a little jaunt north to Indianapolis, a city where we had never been. It was a surprisingly delightful city, though we can’t explain why we were surprised to find it so. 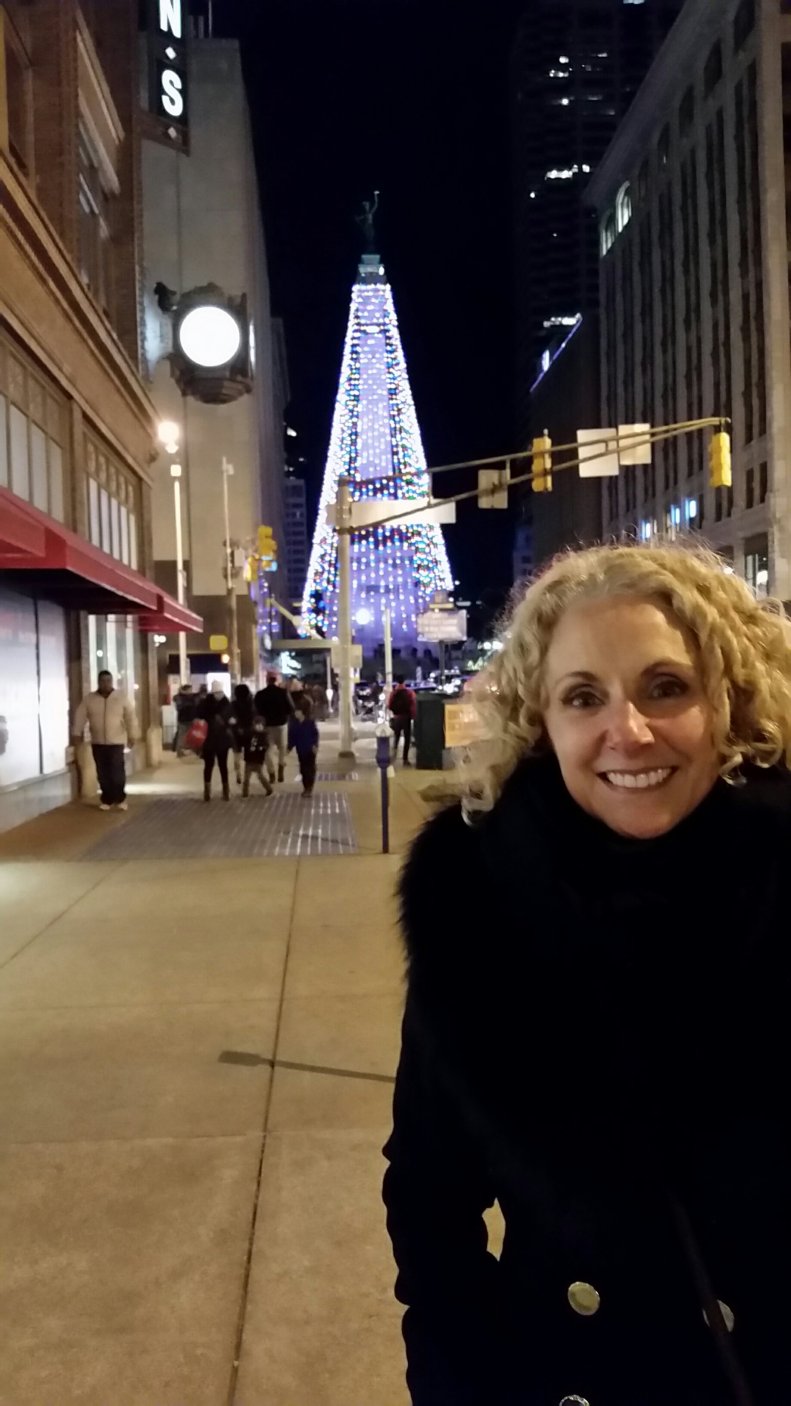 The air was a bit chilly, enough so that Stacy Lyn wore a coat – and so did the natives, so don’t go thinking it was her thin Southern skin that caused her teeth to chatter. But Stacy Lyn never minds the chattering of teeth, not at Christmastime and not if it means she gets to experience a new place on the map.

The first evening revealed to her the truly magnificent State Capitol Building. As awe-inspiring as the building itself was, this man-made entity could not touch the beauty of the natural surroundings. Late autumn trees lined the walkways and invited visitors to read the plaques dedicated to those tree people who are dedicated to trees. Stacy Lyn discovered some kindred spirits here. 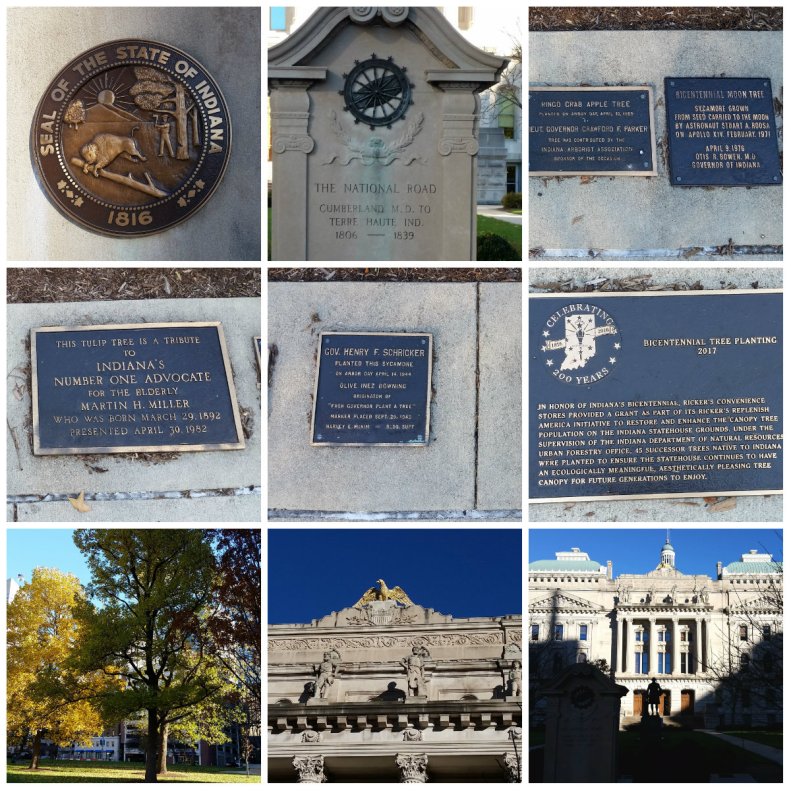 On her first day in town, from the hotel, she took a right to explore the downtown area, also the oldest and most charismatic part of the city. There she snapped a picture as we crossed an old cobblestone road on the way to the St. John Cathedral (which she can tell you about later). The SouthWest Quad paid attention to the city’s history, informing passersby via sculptures, monuments, and informative blurbs posted hither and thither the stories of those who paved the way for us – both literally and figuratively. 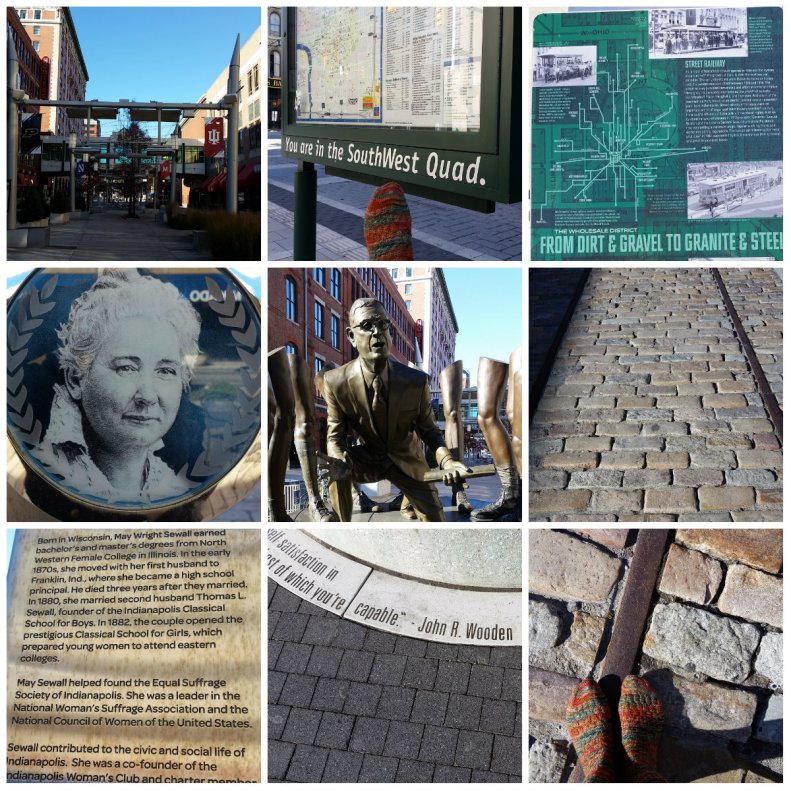 Further on from Georgia Street with its al fresco cafes, she found a beautiful indoor shopping mall where the bridge that draped the highway boasted beautiful panes overlooking pedestrians and drivers bustling about. This bridge also played host to yet another art display – this time the modern paintings of H. Ward Miles – where shoppers could take a load off while simultaneously enjoying a Cinnabon and the artistic interpretations of life. 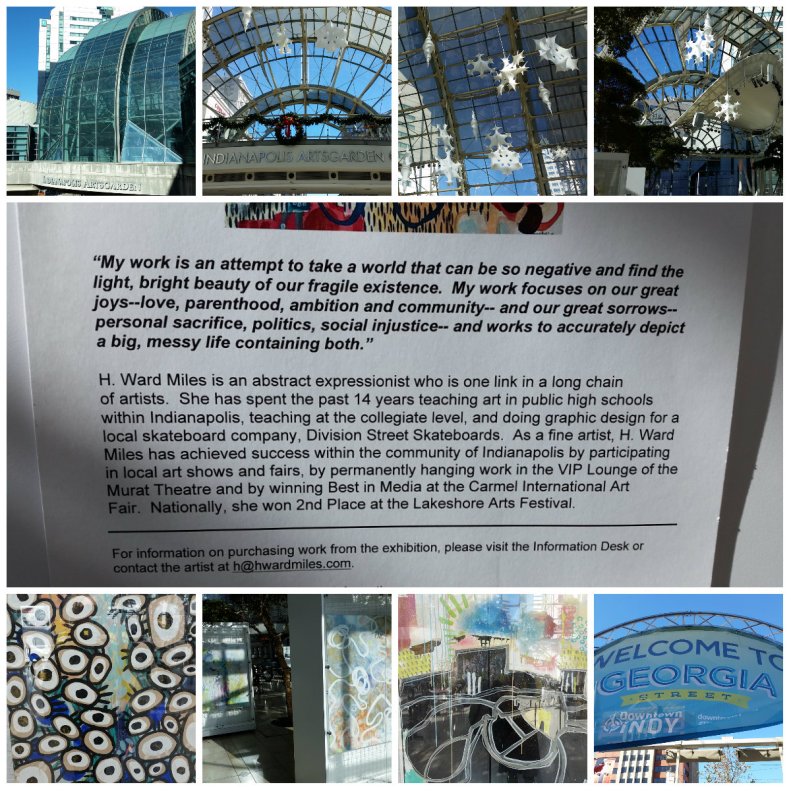 Not too far from the mall, the Soldiers and Sailors Monument plaza was wrapped in a plethora of Christmas lights that were illuminated for the first time that evening. Fireworks exploded as the music played and revelers delighted in cups of hot chocolate and the warmth of friendship. This is Stacy Lyn’s favorite time of year, and she enjoyed participating in the festivities, even if in the midst of a bunch of strangers. 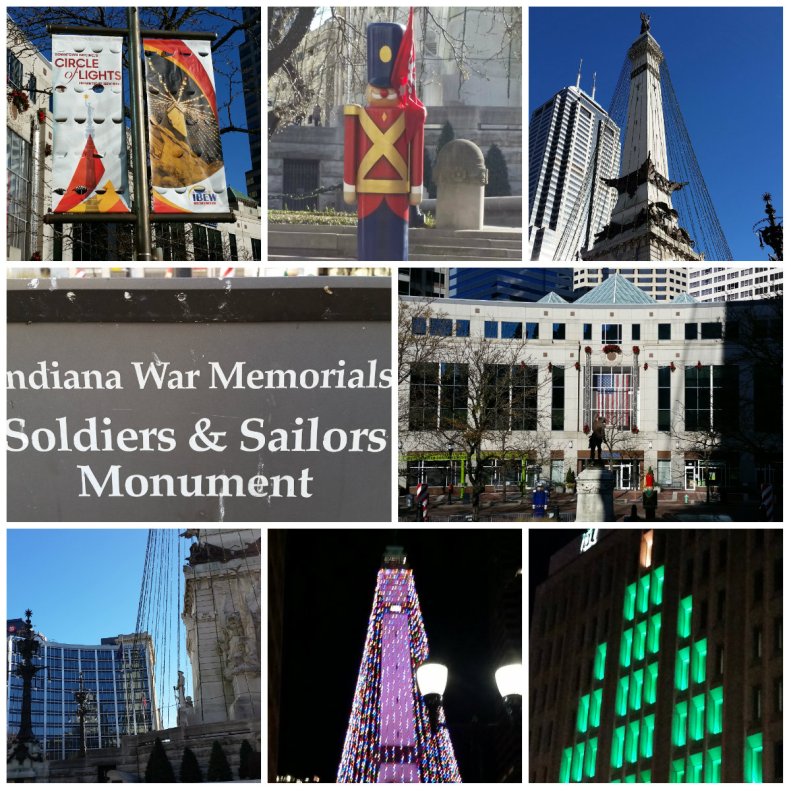 On her next excursion, Stacy Lyn took a left from the hotel and discovered Cultural Trail, so named for the string of museums following the path along the White River. She took a gander at the American Indian museum and then moseyed along the path where she discovered an urban vegetable garden and a series of very Venice-esque canals leading to the river. On top of all this magnificence, a couple of mallards casually enjoyed what seemed to them to be very mild weather. 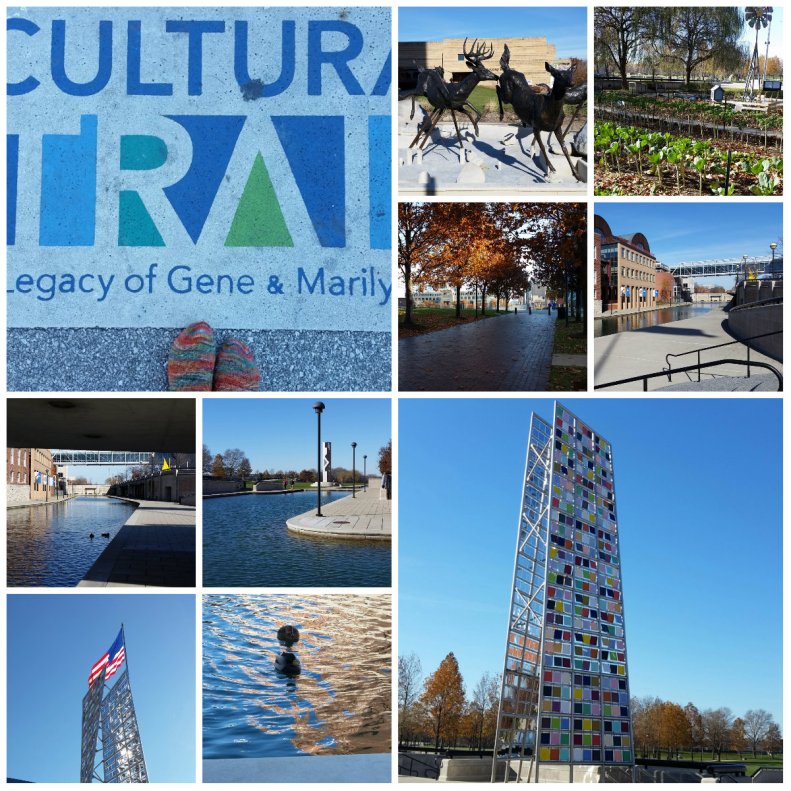 Flanking both sides of the river was a State Park, where Stacy Lyn learned more of Indiana’s rich history. (Did you know that John McCormick’s cabin once stood in what is now the park? Did you know who John McCormick was and what he contributed to the state? We didn’t.) The fun didn’t stop there, however. Only a short walk from John’s monument, Stacy Lyn encountered a lonely waterfall nestled next to an amphitheater – just like those in Gallo-Roman France! Along one of the river’s bridges, Stacy Lyn found (you guessed it!) more artwork – this time metal sculptures (the canoe was her favorite piece), and just over the bridge, a zoo sat smack dab in the middle of everything! Then she discovered the coup de gras – a lending library. Imagine that – Indianapolites value the written word. More kindred spirits. 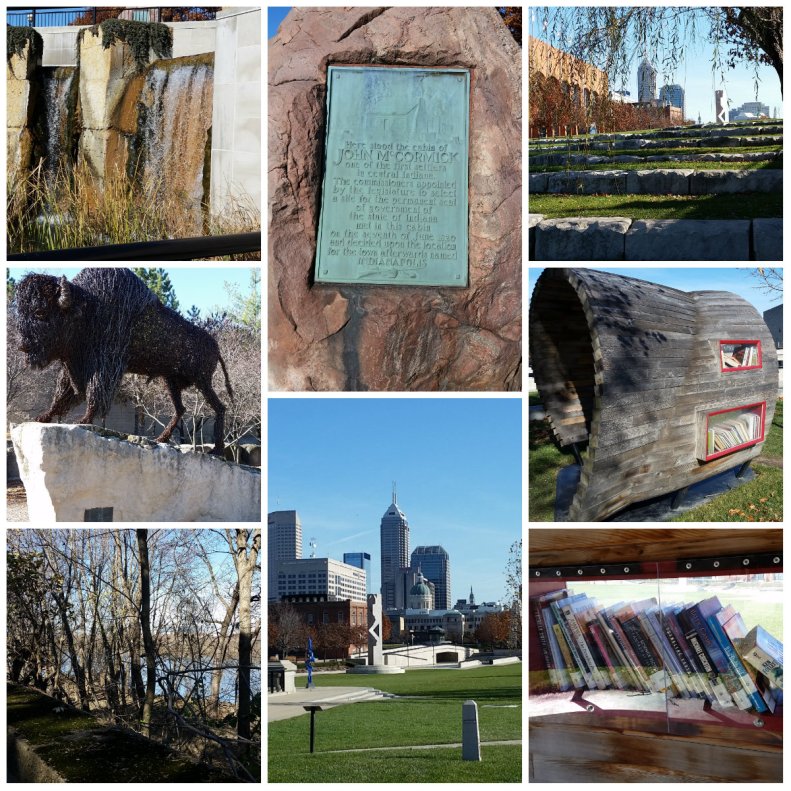 Alack and alas, too soon the long weekend was finished and it was time for us to head back down south. We will fondly remember this town on the prairie. Indianapolis was a very welcoming city, full of wonderful surprises, not the least of which was the city’s very warm people.Stacy Lyn wouldn’t mind visiting again. She wouldn’t mind that a-tall.