Good Day, Gentle Readers! It is we, Stacy Lyn’s Traveling Socks. Where, pray tell did Stacy Lyn wind up this time? Here’s your hint: It’s NASCAR season. Have you guessed? Yes, we landed in Talladega, Alabama to watch the race in person with socks.

If you haven’t ascertained this yet, I will let you know that ordinarily Stacy Lyn is quite a solitary sort of person who is partial to quietude. That is, with two glaring exceptions: rock music and muscle cars. So, this race season, for his birthday, Stacy Lyn surprised Norm with tickets to a rocking, racing good time in Alabama. Time for a road trip!

Departure day arrived and it proved to be a beauty with nary a cloud in the sky; a gentle breeze blew away the restlessness of spring (complete with doldrums) and replaced it with celebratory anticipation. We’re going to a NASCAR race!

On Saturday, before the 300 began, the “stars” of the 500 were qualifying for their starting positions. Stacy Lyn was rooting for number 48, also known as Jimmie Johnson. Alas, he was bumped from the top twelve positions, so we didn’t get to see him run a second qualifying round. No worries, my friends. The weekend was only beginning, and what does pole position matter anyway? We can’t remember a time when the number one driver actually won the race – but we are only a pair of Socks, so we could be a little fuzzy on those statistics, no pun intended. 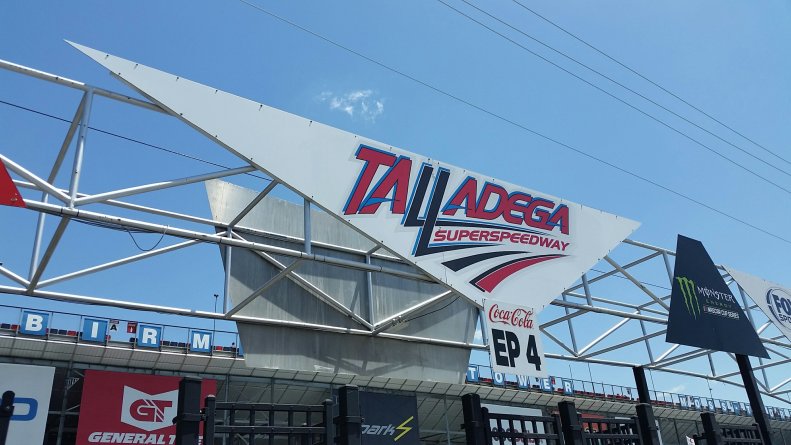 After the National Anthem was sung beautifully by a seventeen-year-old young woman, we heard the words everyone longs to hear, “Gentlemen, start your engines.” At least, that’s what we think we heard. Although, the address, if stated as such, was a misnomer because there was actually one woman racing in the 300, a Ms. Jennifer Jo Cobb, number 55. She finished the race respectfully in the top twenty-nine avoiding a mid-race crash. (No injuries, thank goodness!)

For a good portion of the race, Justin Allgaier (number 7) was in the lead. In our amateur assessment, he made one fatal error – he gambled on the amount of gasoline it would take to get to the finish line, and he lost. Midway through his last lap, he ran out of gas! Imagine that! This is one of the reasons NASCAR races are so exciting – one can never get too comfortable with the status quo. Something is always about to change the race’s course. Justin did take third place, though. Not bad a-tall for coasting in on fumes.

Number 23, Spencer Gallagher, took first prize, which surprised us royally. He had been in and out of pit road several times trying to get his crew to fix whatever was ailing his steed. Well, we don’t know anything about cars, but his crew apparently does, for whatever magic they pulled out of their hats worked well for Spencer. Congratulations!

On Sunday morning, when everyone else was getting ready for the 500, Stacy Lyn and Norm packed up the motorcar and hit the road for home. (Stacy Lyn did stream the results and checked in every once in a while to check on Jimmie. He was among the top five or six racers for a good part of the time, but he finished in sixth place, in case you were wondering.)

The weekend proved to be a good time, and if we have to wax philosophical, isn’t that what life is? The quest for a good time, happiness, joy, bliss, passion – whatever you want to call it. (We’re a pair of socks, not Descartes.)

Until next time, Readers!