When I make the journey to Colorado to visit my beautiful daughter, it’s a long, long way no matter which mode of travel I choose – driving or flying. Sometimes I opt for flying if I don’t have much time. Sometimes I prefer driving even when I don’t have time because flying has become such an unpleasant experience in recent years. It would take me a decade to ramble on about all of the injustices that airlines commit upon their customers, so I won’t go there. But those injustices are why I sometimes choose driving in lieu of flying. Driving comes with its own hazards, however. I had to replace my windshield after one trip, thanks to a pick-up driver’s dirty bed spewing a maelstrom of rocks upon my unsuspecting little car. I also discovered that the only Starbucks on my route of 1,100 miles are located in Paris, Texas and Trinidad, Colorado. That’s quite a way to go on a barren route with no Starbucks. 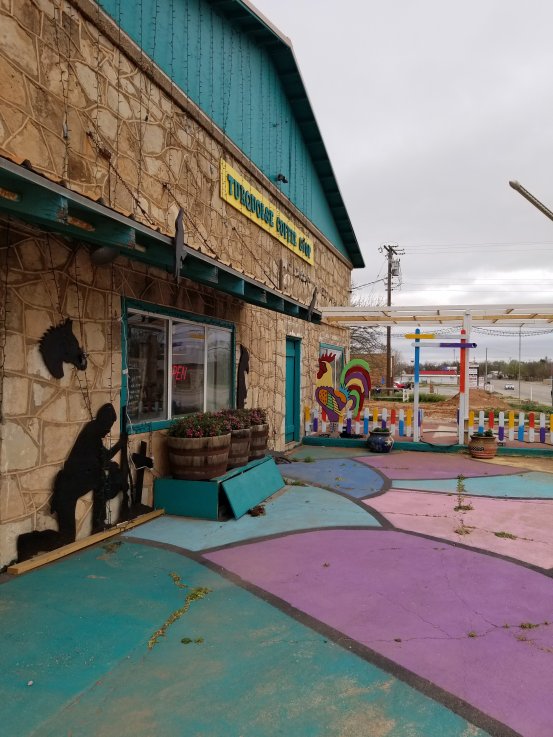 No need to fear weak, burnt coffee any longer if you’re driving across the fields of North Texas. There is a little treasure I discovered in Chillicothe: Turquoise Coffee Stop.

Norm and I were on the way home. We were plodding along North Texas. The weak late-winter sun battled unsuccessfully the cold wind as sandstorms and tumbleweed assaulted our car. Then the heavens opened up and the angels sang when Norm saw a sign that advertised espresso, lattes, and homemade goodies. Could this be? Hundreds of miles of windmills, fast food, and gas station coffee, then voilà – espresso? Even though I had been silent for most of the trip – still feeling weaker and more exhausted than usual sitting in a car for hours as I recovered from the flu – Norm knew what I was thinking. “Do you want to stop and get an espresso?” he asked. “There’s a café up ahead.” As we passed the cute little coffee shop, I hemmed and hawed, unable to make a decision in my cold-induced brain fog. The café had come up so fast and was on the opposite side of the road. Should we turn around? I was so tired. It was hard to think. Norm made a quick decision, turned the car around, and parked on the side of the Turquoise Coffee Stop. He knows me well. I wanted to stop but couldn’t make a decision. Norm, my hero.

The exterior was so inviting – a splash of color in an otherwise monochromatic palette. It beckoned, “Come, weary traveler. Have an espresso and wake up!” Ok, that’s melodramatic, but that’s not far from how I felt seeing this little café hundreds of miles from home, or anywhere else for that matter.

When I walked inside, I was wowed again. All of the décor had the perfect touch – wooden tables, colorful coasters, comfy chairs along the paneled walls, artwork splashed here and there, and crafts (made by the owners) for sale on the counters. And the pièce de résistance – the scent of real coffee. If you’re not a coffee freak, it’s hard to describe what the smell of good coffee does to someone who sniffs out good coffee the way a hound dog follows the scent of prey or a sommelier deftly identifies a magnificent vintage of wine with a mere swish on the tongue. It’s almost an out-of-body experience. And that’s how I felt when entering the Turquoise Coffee Stop – as if I were floating on a cloud looking down upon a psychedelic reality.

I talked to the owners, Warren and Debi. It’s always interesting to get someone’s story, especially someone who appears to have done something that no one else thought of doing, at least not along the interminable stretch of Highway 287. They hail from Austin, Texas and wanted to open their own café, so Warren researched locations where their café would thrive. Voilà – Chillicothe, Texas. Who’d’ve thunk it? Warren and Debi, that’s who.

Though I live too far away to visit daily, I will definitely make a stop every time I find myself on the way to or from Colorado. The latte I ordered was nothing short of celestial – absolutely perfect. The aroma, the strong espresso without the bitterness, and the microfoam sitting atop the crema melded together to form a deliciously smooth latte. I perked up as I inserted a pin on the “Where Is Home” board. People as far as Israel have stopped here on their way to somewhere else. Might I suggest you do the same if you find yourself if Chillicothe, Texas? You won’t regret it. Until you get to Chillicothe, check out their photographs on Instagram at turquoisecoffeetexas. I think you’ll be delighted.