Every December, a ferris wheel is constructed on Place de la Concorde in Paris.

It remains in its place of honor until the end of February.

So when Norm asked me what I wanted to do on my birthday, I said I wanted to ride the ferris wheel. We walked to Place de la Concorde and waited for our turn on the wheel. We stepped on within twenty minutes.

It was a cold, cloudy day, but even so, a perfect day for a ride. We shared our car with these two.  I loved hearing the wonder and amazement in the little boy’s voice as he spoke to his mother.

The Tuileries garden was right under our noses.

I looked at the traffic on Champs-Elysées from a bird’s perspective.  I had been mired in that traffic too often, and for once I thought it a beautiful sight . 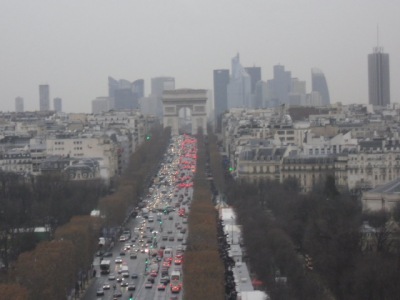 And in the opposite direction, Sacre Coeur loomed large, protector of the city.

The Eiffel Tower would not be ignored as she stood proud beyond the golden flames on the Alexandre III bridge.

Norm, just being Norm – an engineer who looks at the world differently than this right-brainer – had to take a picture of the wheel itself: its structure, how it was built, its engineering design. I guess the world’s beauty can be seen in many ways, from many perspectives, and from different angles.

Before we knew it, our ride was over. It was a good day, a memorable day. And then, suddenly, February came. I had become accustomed to the wheel’s presence and just assumed that she would always be there. Norm pointed out one day that the wheel was coming down.

Within a day – poof! She was gone. 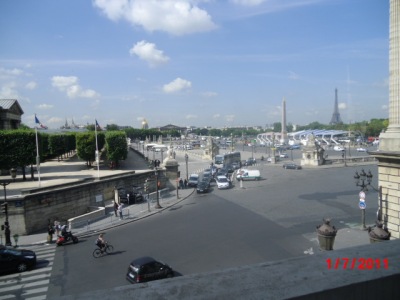 Until next winter, then!

2 thoughts on “Goodbye to the Concorde Ferris Wheel”