One ordinary day in Monroe, before a thunderstorm threatened to blow into town, Jillian and I were sitting outside at Starbucks minding our own business, as we are wont to do. Jillian noticed that a bird had built a nest on top of the speaker. The builder thought that his nest was tucked away and hidden under the awning, but he didn’t know about Jillian’s keen eye when he chose this location. 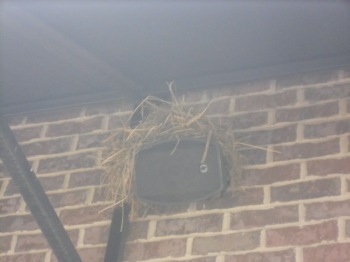 As our conversation wound up and away like the tendrils of smoke escaping from a chimney, we became aware that it was more and more difficult to hear each other. Someone was making a racket such that Jillian and I had to raise our voices louder and louder as we talked. 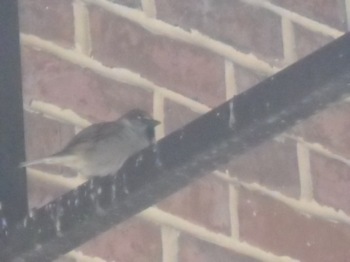 A little house sparrow was perched on a rafter – it’s pretty obvious from his mess that he had set up house there quite a while ago. We don’t know what he was trying to say, nor to whom, but we paused our own thoughts to listen to his animated song.

Before we knew it, the rain pummeled the earth, and we had to say goodbye to our feathered friend. We hope he and his home survived the deluge. Louisiana doesn’t mess around when it comes to rain! 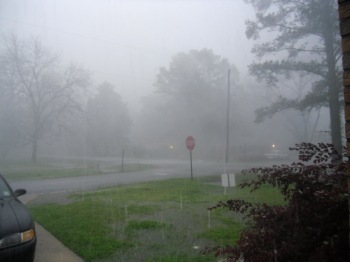