The villagers in Gbodjomé, Togo celebrated the opening of the new wing of their vo-tech school for girls in April 2010.

The opening ceremony began with speeches, of course.
(The Togolese love oration.) 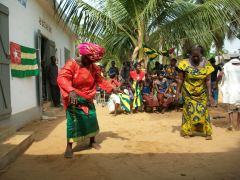 Then came the dancing,
colorful and lively.
Mothers and grandmothers were no
strangers to the fun.

Strange creatures entered the scene.
They were magical beings, twirling around the stage, casting spells. 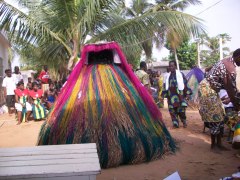 They danced over an ordinary bowl,
a bundle of wood, and a bottle of water
that had been placed
on the ground by two fathers… 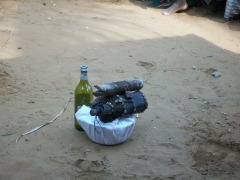 ….and when the creatures moved away,
the items had been transformed
into crabs and candy for the children.

When the performances were finished,
the feasting began. Though their customs were strange to me, I  could identify with the Togolese’s need to instill in their children their values, their history, their sense of purpose.

Togolese families are strong
because such traditions
have been upheld throughout the generations.

Even if one has nothing else, one must hold tight to her family’s traditions.

10 thoughts on “Celebration in Gbodjomé, Togo”