Home again during summer for the first time in years. I want to go back to those days when every room in my house had touches of the season in it – such as the golden yellow of the black-eyed Susans that blossom everywhere in summer.

I no longer have all those things that I created with my own hands. Katrina *yawn* stole so many things, and I don’t have the energy to recreate a lifetime of heirlooms. But it’s easy to change the colors around the house to reflect the season. It lifts a wilted mood, too, as we enter the dog days of summer. 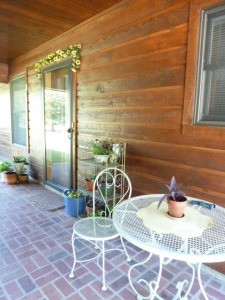 Above the back door lintel, I’ve draped a garland of sunflowers, the flora which most closely resembles our black-eyed Susans. That yellow place mat in the center of the bistro table is an end-of-the-season clearance find at the local hobby shop, and the wooden tulip in the flower pot is a thrift-store find.

This porcelain plate was a gift from my sweet Jillian. She knows how much I love the summer flowers of Louisiana, including gardenias. She also knows what her mother misses and steps in to fill the holes in my heart with joy. She is my joy.

Norm brought this hand-painted pottery back from a business trip to Poland. It was in one of my “hurricane boxes” – packed and taken with us when we evacuated. We took everything that was in our curio cabinet – so many memories attached to the things in there. 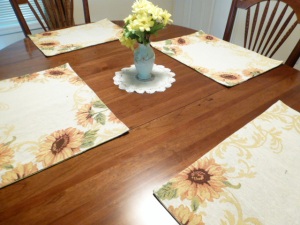 I rotated the place mats, too – another end-of-season clearance find – and added yellow flowers to a vase I found at the thrift store. 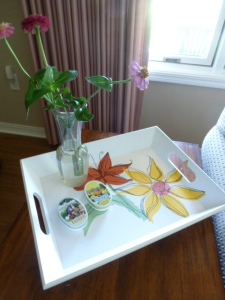 I dusted off this wooden tray – another gift from Jillian – and placed it on the living room chair-side table to hold the zinnias from my flower box and the little tins filled with Flavigny anise and lemon drops that I picked up in France. (I don’t indulge in them very often – I want to savor them for as long as possible.) 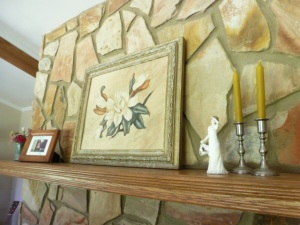 And my favorite place in the house – the fireplace – could not be ignored. More zinnias grace a little vase I bought at Silver Dollar City in Missouri the year that we went to see Laura Ingalls Wilder’s home. I could not resist yet another painting of the Southern Magnolia; it’s the Louisiana state flower, and the colors in this one look as though the artist painted it especially for our stone fireplace.

Next to it on the right is my Royal Albert that I bought in London. I thought it was a Royal Doulton (something I had always wanted, but that’s another story), but when I got it home, I noticed that it wasn’t. No worries – she was the one I wanted, and she comes out in summer to dance next to the magnolias. The gold candles replace the navy ones of Independence Day.

See the photograph on the left? I change out that picture as the seasons do, too.

I write the occasion and the year on the glass with an Expo marker (which can be erased). This picture was way back when our Jillian was a tot. She liked to use the watermelon as a chair when having her morning cup of milk.

So that’s it, Dear Friends. Not much, but something, and we all know that something is more than enough.

For more ideas, visit my friends Karen at Beatrice Euphemie and Mariette at Back to Basics. Both of them are very creative and have impeccable taste.

Hope you are finding summer color wherever you are. ~Stacy