Gentle Reader, I discovered that those pears in my yard are Kieffer pears, also known as “canning” or “cooking” pears.

I took the easy route – I froze them instead of canning them. (I’ll tackle that later.)

First, I picked a bucket of pears. (Sounds like the beginning of a tongue twister, doesn’t it?) 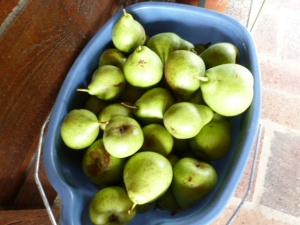 Next, I peeled and cored all of them, depositing them in acidulated water in the meantime. (Acidulated water = 3 tablespoons of lemon juice in a gallon of water.) 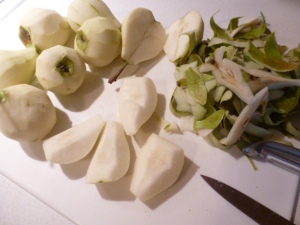 Then I boiled them in sweetened water. Here’s the recipe based on just a few pears at a time.

How to Freeze Cooking Pears

6-8 pears, peeled, cored, drawn and quartered (a bit of medieval humor there)
1 quart of water
1/4 cup sugar
cinnamon stick or nutmeg or whole cloves – your choice

(You can substitute the sugar water with white grape juice or apple juice.)

Dissolve sugar in the water; then add the pears and cinnamon. Bring to a boil. Reduce heat and simmer for 25-35 minutes, until the pears are soft enough to pierce with a fork. 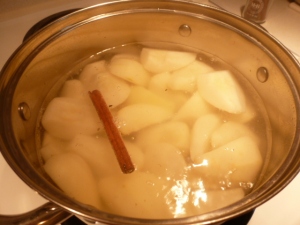 Let cool in the pot. Pour the pears and the juice into a freezer bag or container. 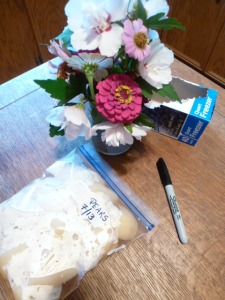 They will keep in the freezer for up to three months. Now it’s time to pick the figs that are ripening on the trees even as I write these words. ♥

6 thoughts on “Cooking and Freezing Pears”