Greetings, Gentle Readers! It is we, Stacy Lyn’s Traveling Socks. It has been a while, hasn’t it? That’s not our fault, though. We would go anywhere at the drop of a hat, but Stacy Lyn has other ideas lately. She likes to sit and contemplate on the bayou more than anything else, including traveling.

Every day when she opens her sock drawer, we peek at her from under all of her other ordinary socks and wonder why? Why must we lie in the drawer, day in and day out? Why won’t she just go somewhere? Anywhere?

Traveling has become so boring, so hum-drum, she says. Unless it is to travel to see people in addition to places. And that, my friends, is exactly what happened late one afternoon in September – the Bubbleheads were getting together for their bi-annual reunion; this time on the Puget Sound. Yay! Stacy Lyn dusted us off, took us out of the drawer, and voilà – we landed in Washington State, ready for some serious sight-seeing (and visiting friends, too, of course).

First stop – Seattle, which we accessed via the ferry from the opposite side of the bay. As we approached the vessel, one of the veterans pointed out this starfish hanging on to the trestle. Now that is something you’ll never see in Louisiana!

Seattle barely came into view, hidden behind a shroud of fog. We think, perhaps, she is a little bit bashful. So many newcomers every, single day. Stacy Lyn would hide from such fanfare herself, so we are quite familiar with this concept. However, she did take us out for a photo-op just before our ship landed.

We headed directly for the Space Needle. Are you surprised? You shouldn’t be, if you were paying attention! Before we purchased our tickets, another photo-op. We come out of the drawer so rarely that we implored Stacy Lyn to let us come out of her boots to prove our visit to Seattle. Jeez!

We could show you the skyscape – ok, here is one shot of Seattle from the Needle – but everyone does that. So, let us show you this interesting artwork on the top of one of the buildings: two gigantic daddy-long leg spider sculptures. One had to look down to see them, though. Here’s another thing we found when Stacy Lyn looked down: brass signs indicating directions. Stacy Lyn couldn’t help but notice that this one pointed in the direction of home. That’s where her heart always is, no matter where her body may be.

After we took the obligatory trip up the Space Needle, we headed to the Rock Museum. Rock ‘n’ Roll, that is, where they were hosting an interesting exhibit – Women Who Rock. You wouldn’t know by looking at her, but Stacy Lyn is a rocker.

The building itself was worthy of notice, sandwiched under and over the monorail. We saw interesting items, such as this coat of Jimi Hendrix. (Stacy Lyn has one that looks like this, though most people tell her that it looks as though it were made from her grandmother’s couch.)

Not only did they show off Kurt Cobain’s guitars, but they also opened another window into his soul through his artwork. A reflection of his music.

Then we moseyed over to the women’s exhibit, where Stacy Lyn snapped a picture of her favorite women rockers, the Wilson sisters of Heart. Wow! What a set of pipes Ann had. Rather, has. She sang a couple of weeks ago when Heart was inducted into the Rock ‘n’ Roll Hall of Fame. She’s still got it.

After all the excitement of the museum, we took the monorail downriver – oops. This wasn’t a river we were traveling, it was a sound. So, we headed downsound (which sounds dumb) to the world-famous Pike Place Market. If you know Stacy Lyn, you know that the motive for doing such was to visit the very first Starbucks store.

But first, we stopped for a bite of delicious seafood and a glass of tasty Washington wine with the Bubbleheads. The food was amazing, and the company even better. 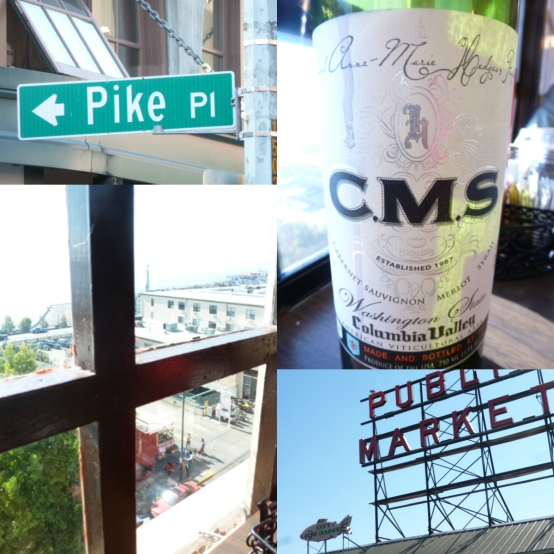 There it was – Starbucks’ Pike Place store, a tiny place that has become so much more. It’s all about vision, and Howard Schultz surely has it. Stacy Lyn allowed us to pose with a band of local musicians outside the store. Not only were they good at their craft, but they were good sports as well.

The market itself was worth the hike. The produce and seafood were as fresh as anything that we saw in the markets in France. Look – crawfish! $7.99 a pound – egads! Socks, we’re not in Louisiana anymore. (And you thought mudbugs were just for Swamp People. Silly reader!) After gawking at the market offerings, we followed the pig prints (which Stacy Lyn thought were coffee beans) to the pig, whom Stacy Lyn insisted on kissing.

As the sun began its nightly descent into the netherworld, The Bubbleheads and Stacy Lyn headed back to the ferry. What a beautiful place Seattle is! We would gladly visit again, if Stacy Lyn would allow it.

Stay tuned, Gentle Readers. We were out of the drawer long enough to visit other places on the Puget Sound with the Bubbleheads. See you soon!

12 thoughts on “Socks, Seattle, and Bubbleheads”